This is what is generally understood by the term ‘toothache’. The pain will have had quite sudden onset often following a period of thermal or sweet sensitivity which has progressively increased in duration. The pain is poorly localised, throbbing in nature, lasts for hours, disturbs sleep and is poorly controlled by analgesics. The pain may radiate to adjacent teeth and ipsilateral jaws. A diagnostic clue can sometimes be gained if the patient also complains of ear pain because posterior mandibular teeth with acute irreversible pulpitis often present with pain radiating to the pre-auricular area. The unmyelinated c-fibres within the dental pulp are responsible for the dull (with acutely severe exacerbations), continuous, nature of the pain of acute irreversible pulpitis. The pain is sufficient to make even dentally phobic patients attend for treatment and it is often this group of patients who may present to the General Medical Practitioner.

The tissues within the pulp of the tooth will have become acute inflamed and will be releasing pain causing substances. Inflammatory infiltrate will increase pressure within the pulp chamber leading to compromise of the blood vessels and subsequent pulpal necrosis. Because the inflammation is enclosed within the tooth and because there are few proprioceptive nerve endings in the dental pulp, the patient is often unable to localise the pain. The necrotic process and inflammatory response will continue to spread down the inside of the root of the tooth through the root canal system. 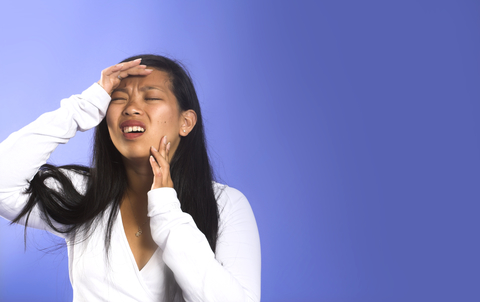 Management of acute irreversible pulpitis is by physical intervention under local analgesia. Opioid analgesics are not as effective as NSAIDs or paracetamol. Antibiotics are ineffective and should not be prescribed. Patients who present to their General Medical Practitioner should be given their Health Board Dental Helpline number to contact and be appointed to an emergency dentist. Patients who are very anxious or phobic about dental treatment can be reassured that their dental anxiety can be managed by the use of conscious sedation although this is seldom possible in an acute situation.