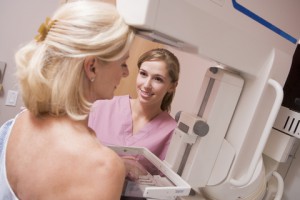 The outcome from a Cancer Genetics referral depends on assessed risk and patient preference. The patient may be offered one or more of, lifestyle advice, early or more frequent screening, chemoprevention, genetic testing and prophylactic surgery.

Early screening for women with a family history is coordinated by Breast Test Wales as shown below.

In Wales, women with a proven BRCA gene are offered the same screening as women at high risk but their 18 monthly mammograms continue until age 70.

Risk reducing mastectomy in unaffected women at risk has received great publicity recently. Angelina Jolie has revealed that she underwent surgery in 2013, she also made public that she is a carrier of a BRCA gene.
Less well publicised is prophylactic oophorectomy, again Angelina Jolie revealed she underwent this procedure in 2015. Both procedures may be considered and pro-actively raisedwith women in the high-risk group and should be discussed, if raised, with women in the moderate-risk group.
The NICE guidance states that bilateral risk reducing mastectomy is appropriate for only a small proportion of women from high-risk families. NICE stresses the importance of the multi-disciplinary team and the involvement of clinical geneticists and specialist surgical teams in the process. NICE guidance is very similar for the consideration of oophorectomy. (see NICE guidance p34-36)

In 2006 the STAR trial reported (Study of Tamoxifen And Raloxifene). A double blind randomized trial, it studied 19,747 postmenopausal women at increased risk of breast cancer. It concluded that:-

A recent meta-analysis published in the Lancet demonstrated sustained benefit beyond the five years of treatment albeit at a lower (25%) level. (NNT to prevent 1 breast cancer over a 10 year period with 5 years of SERM treatment = 42)

The service configuration in Wales is such that the clinical geneticists do not prescribe and breast test Wales and breast surgeons have no direct clinical contact with asymptomatic patients. It is likely therefore that if a woman decides to opt for chemoprophylaxis that the initiation and prescription of these drugs will fall to general practice (albeit on the specific advice of clinical geneticists).

A discussion should have taken place in the genetics clinic, with each woman, who has made a decision on chemoprevention, having documented absolute risk/benefit information not only for chemoprevention but other alternatives. The prescriber should be aware of the benefits of prescribing (a 50% reduction in the incidence of breast cancer), menopausal status (raloxifene and Anastrozole for post menopausal women only), side effects and adverse effects.

NICE state: Chemoprevention of familial breast cancer with tamoxifen in premenopausal women, and with anastrozole, tamoxifen or raloxifene in postmenopausal women, is recommended as an option, Familial breast cancer: patient decision aids user guide March 2017 Page 5 of 13 in the NICE guideline (see the guideline for full details of recommendations). At the time of publication (March 2017), none of these medicines had UK marketing authorisations for this indication. The General Medical Council (GMC), in its Prescribing guidance: prescribing unlicensed medicines, states that although doctors should usually prescribe licensed medicines for their licensed indications, they may prescribe unlicensed medicines when it is necessary to do so to meet the specific needs of the patient.

In Wales genetic testing is currently offered to affected individuals with a greater than 20% risk of being a carrier of a BRCA1 or BRCA2 gene mutation. The risk is calculated using a computer algorithm called BOADICEA. This is a freely available program that can be used by members of the public, it uses family history to estimate the risk of BRCA1 and BRCA2 gene mutation in individuals.

It is 'preferable' to test affected family members (i.e. those with an established cancer diagnosis) as this gives more accurate information for the family as a whole.

HRT – the use of HRT increases the risk of breast cancer

Smoking – advise to not smoke in line with general heath advice

Weight – increased risk of postmenopausal breast cancer from being overweight