Fibromyalgia is a diagnostic term for a chronic widespread centralised pain syndrome with attendant features. There is no diagnostic laboratory test or imaging. It is characterised by chronic widespread pain for which no physical explanation can be given. There are accompanying symptoms, which may or may not be present in an individual and will usually vary over time. 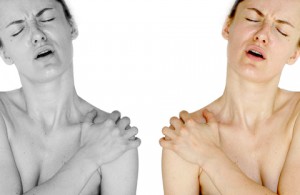 The reported prevalence of fibromyalgia varies between 2-5% of the general population, second only to osteoarthritis in chronic “rheumatic” diseases. It can develop at any age.

A biological basis of fibromyalgia has been demonstrated using neuroimaging of the brain. People with fibromyalgia experience pain where others would perceive touch or pressure. Even tight clothing can stimulate pain in some sufferers. The imaging studies showed activity in pain processing areas, in those with fibromyalgia, in response to both pressure and temperature changes.

Pain (required symptom for the diagnosis)

People with fibromyalgia usually have pain as the central symptom. The onset of the pain is usually insidious and may initially be localised. The pain may have a “neuropathic” quality with stinging, burning or tingling types of pain being reported. Physical examination for a cause of the pain may only reveal localised tenderness. The pain may start with an intermittent pattern but usually becomes more constant and widespread with time.

The severity of the pain (and other symptoms) varies and can be exacerbated by external factors such as stress and the weather (cold or humid weather are the most frequently cited by sufferers). There may be sudden dramatic worsening of the condition from day to day.

Up to 75% of people with fibromyalgia will have a co-existent mood disorder. They are more prone to anxiety, depression, post-traumatic stress disorder and obsessive compulsive disorder. It is unclear if this increased susceptibility is as a direct result of the fibromyalgia.

The disturbance of sleep can have a negative effect on the other components of the symptom complex. Fibromyalgia can adversely affect sleep with an increase in sleep latency (the time taken to go from full wakefulness to sleep), fragmented sleep and sleep disturbance. Any of these effects can lead to non-restorative sleep. A large UK study demonstrated an association between non-restorative sleep and the development of new onset widespread pain.

When compared to non-sufferers there is an increase in memory dysfunction and verbal fluency in some people with fibromyalgia.

People with fibromyalgia have a higher incidence of:-