Living with arthritis as a chronic pain condition, can lead to significant psychological problems such as helplessness, depression and anxiety that further exacerbate pain and disability (Katz and Yelin 1994). People with chronic pain are often faced with difficulty in performing basic and valued activities of daily living such as dressing, eating, shopping, doing household chores and engaging in social activities (Katz 1995). Recognition of these limitations has demonstrated a growing awareness of the need to incorporate behavioural and psychosocial approaches alongside biomedical approaches as an additional means of reducing pain and disability as well as improving a person’s quality of life.

The International Association for the Study of Pain defines pain as ‘an unpleasant sensory and emotional experience’. Whilst we as health professionals have a good grasp on the biological mechanisms involved in the conduction of pain signals and the mechanisms by which they can be influenced through pharmacological and other means, we often forget that pain is a highly subjective and personal experience and always has an emotional dimension that we need to appreciate. Despite this, many doctors and therapists wrongly attribute pain as being either physical or psychological. There are many instances especially for hip and knee pain sufferers where the physical findings which may explain a patient’s symptoms have been exhausted and so symptoms are neatly explained away as being psychogenic in origin.

Most pain studies show that while the main emotions experienced in an acute injury include anxiety, increased bodily awareness and fear are helpful as a threat warning, when accompanied by depression and anger, are maladaptive in sub-acute and chronic pain. These emotions are heightened by their pain and disability and if left to run out of control, can aggravate and perpetuate the pain and anxiety experienced by the patient and become part of the problem.

We all have different ways of coping with stress. Some people describe a feeling of ‘being wound up’, ‘on edge’ or ‘tense’. It may manifest itself as insomnia or a loss of appetite, poor concentration or irritability. This emotion rarely merits treatment in its own right but excessive or prolonged anxiety can become harmful. Although it is one of the most basic of emotions in illness, it can have a major impact on consulting and health care. Heightened anxiety can lead to increased pain due to the increased sympathetic mediation.

Hypervigilance is a term used to describe those individuals who are excessively attentive to their bodily symptoms and is associated with monitoring bodily sensations for threat. This dysfunctional attentional style has been assumed to maintain and amplify bodily sensations and is seen in the various fear-avoidance models where fearful patients become increasingly vigilant for signals of bodily threat, which in turn leads to avoidance behaviour and increased disability.

Several factors are thought to be involved in moderating the attentional demands of pain, the strongest and most consistent effects relate to fear, anxiety, and catastrophizing. Attentional vigilance for pain-threatening information results in a greater chance of detecting potential sources of threat, exacerbating pain, disability, deterioration in physical health, social isolation and work loss. Attentional bias to pain may illustrate a lack of acceptance of having persistent pain and may be detrimental to management; acceptance is beneficial in terms of patient functioning.

Pain related fear refers to an excessive and debilitating fear of physical movement and activity resulting from a feeling of vulnerability to pain. Patients with pain often have areas of concern which need to be managed carefully. All too often, health professionals give inadequate or conflicting advice which undermines any faith and confidence offered down the line in the patient’s management journey. Specific areas of concern may include:

It is a normal reaction in the first instance to avoid what appeared to be the cause of the pain. However, fear may lead to complete avoidance of that activity. Up to a point this would seem reasonable, but eventually misunderstandings develop into fixed beliefs about hurt and harm surrounding pain. For instance patients might avoid any treatment or rehabilitation where a degree of pain may be experienced.

There is increasing evidence that fear itself, of pain or harm is a fundamental mechanism in promoting pain and disability. To adequately reduce these fears and anxieties, clinicians need a clear understanding of what the patient wants from the consultation. Failure to address these issues increases the chance of misunderstanding and dissatisfaction which may affect treatment and recovery. A useful analogy in breaking down this fear would be the example of an athlete recovering from injury, or unfit, who accepts pain as a natural consequence of training.

Patients with chronic pain often describe depressive symptoms which are rarely severe enough to be regarded as a depressive illness, although the latter should not be totally disregarded. The key feature of depression is having a negative view of oneself, the environment and the future. Patients may have a lack of energy and interest in life with a slowing up of mental function. They may feel sad, hopeless and demonstrate a pessimistic view of their future. Sleep, appetite and sex drive may be affected and many describe unexplained problems such as aches and pains, headaches, weakness and constipation.

For most patients, depressed mood is thought to be a consequence of their pain and the best treatment is helping them regain some measure of control over their pain and disability. Again, depressive thoughts will increase hopelessness, catastrophising about pain, fear and the physical pain experienced.

Anger may take many forms. A patient may be angry with the causal factor of their pain, which may be secondary to a work related problem or trauma. The patient may direct their anger towards the clinicians for suggesting weight loss, exercise or being unable to cure the pain. Loss of a job or litigation may direct anger towards their employer or the legal system. Clinicians also become angry and frustrated with patients for failure to respond to treatment, take the prescribed medication or perform a given exercise or weight reduction programme. This can cause the clinicians to lose patience and sympathy leading to a breakdown in communication.

Beliefs about pain and illness

Pain beliefs are patients own ideas about their pain and what it means for them. These beliefs may range from very general ideas to very specific. Illness beliefs provide us with a framework to make sense of how we are going to deal with pain. They influence our decisions about health care and whether or not we should be off sick from work. These beliefs are often inconsistent and contradictory and can often be difficult to change. There appear to be four main aspects to a patient’s beliefs about illness.

Patients can be concerned not only with the damage that may have already occurred, but also about the risk of further damage in the future. This negative belief that their hips and/or knees may be vulnerable and prone to further injury can limit their ability to take control and personal responsibility of their pain. This in turn may affect their attitude towards rehabilitation and return to work.

The fear avoidance model may be useful when explaining to patients that exaggerated pain perception due to hip and knee pain maintains pain and pain behaviours that are maladaptive; patients are described as having two types of roles: 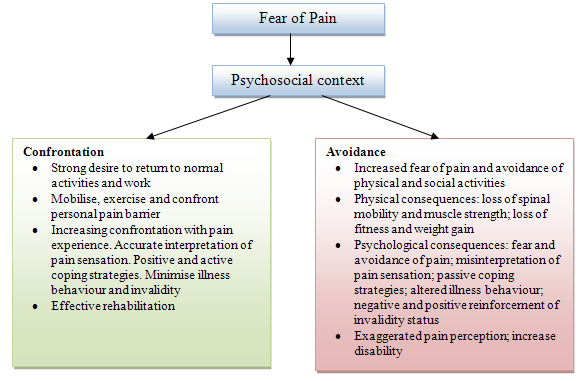