BCC are slow growing forms of NMSC. They increase in size on average from 2-3 mm a year. They rarely metastasize however the destructive nature with which they grow can cause significant morbidity to local tissues. This can be worse depending on the anatomical site. The head and the neck are some of the main areas to be most concerned about.

BCCs are often multiple. This highlights the importance of thorough skin examination looking for others. They can be found across the whole body. There has been an increased incidence in younger patients on the trunk. They are rarely found around the hands and forearms. They are more associated with growing around hair bearing sites of the body.

To help distinguish a BCC from an actinic keratosis (AK) and SCC, they often produce a bloody crust different to the scaling produced by keratinising tumours such as AKs and SCCs.

Superficial BCCs are important to distinguish clinically from other types of BCCs because they can frequently be managed medically, avoiding the need for excision. (3)

Overall there are five types of BCC; nodular, superficial, morphoeic, pigmented and basosquamous. 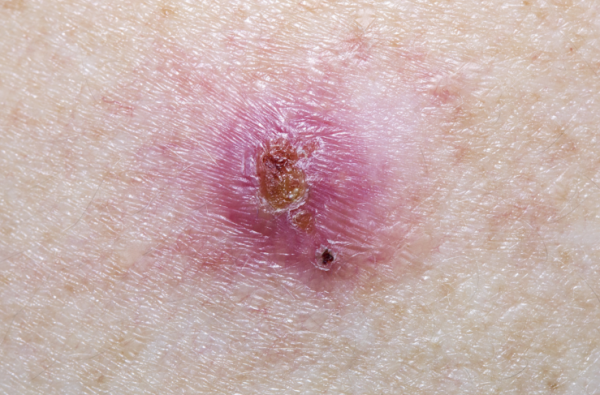 Nodular BCC;These are mostly found on the face and appear as cystic lesions with a pearly surface with telangiectasia. There may be an ulcer present with the ability to infiltrate deeply.

Superficial BCC; These often present in multiple numbers, mostly on the trunk and shoulders. They are well demarcated, scaly, with erythematous plaques often larger than 20mm at presentation. They can be confused with Bowen’s disease or inflammatory dematoses. They grow slowly over months and years. They respond particularly well to medical treatment over surgical.

Morphoeic BCC; Synonyms include sclerosing and infiltrative BCCs. They are mostly found in the mid-facial area. The appearance is mostly skin-coloured, with a waxy surface, sometimes scar-like with an absence of normal skin features (e.g. pores or hair follicles). They can be infiltrative and spread perineurally.

Pigmented BCC; These are coloured brown, blue or greyish. They can resemble malignant melanoma. Histology can be nodular or superficial.

Basosquamous BCC; These can be more aggressive than other forms of BCC. These are a mix of both a BCC and SCC.

BCC is rarely fatal, but can metastasise in a very small number of cases. The majority of BCCs can be treated in an out-patient, day-case setting or community/primary-care setting. However, failure to diagnose early and/or inadequate treatment can result in tumours that destroy important anatomical structures (such as the nose, eye, ear and lip). Such tumours are very challenging to treat, making it difficult to obtain a good cosmetic result even leaving a tumour inoperable.

Factors which increase the likelihood of getting a BCC include the following: UV exposure including natural sunlight and artificial. It may occur in all different skin types showing higher frequencies in people with skin type 1 and 2, and in older generations. Men are affected twice as frequently than women, believed to be secondary to an increase in occupational and recreational exposure. There are case reports of BCC forming at the site of previous traumatic injuries and burns. Smoking can increase the likelihood. Immunosuppression as mentioned increased the chances for developing a BCC.

Patients with two or more BCC under the age of 30 should be considered for further investigation for Basal Cell Nevus syndrome (syn. Gorlin syndrome). (13)