The British Association of Dermatology (BAD) have produced a helpful document ‘The prevention, diagnosis, referral and management of melanoma of the skin. (8)

Summary of the guidelines relevant to primary care management.

There are four main types of melanoma: superficial spreading, nodular, lentigo maligna and acral lentiginous. Subungual melanomas may be difficult to diagnose but are not a distinct type of melanoma in themselves 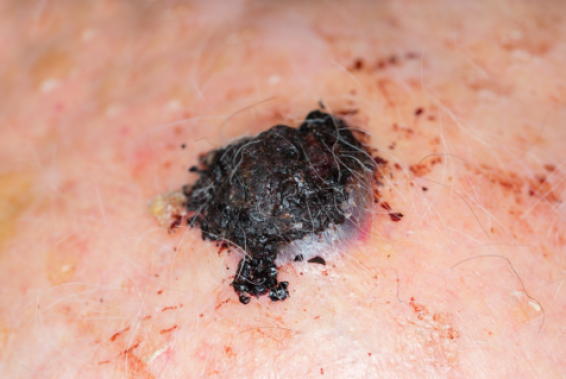 The most common form of melanoma. Compared to other melanomas these are more slow growing, the proliferate horizontally for the first few months before developing deeper invasion. There is an opportunity to diagnose in the early phase and this is related to a greater chance of cure. Most are 7 mm or greater in diameter when diagnosed. Generally they are irregular in colour including three or more different colours such as browns, reds, blacks and blue-blacks. They often lack symmetry with geographic borders.

These are more common in older individuals. They grow more rapidly, with the direction of growth being vertical. In comparison to superficial spreading melanomas the colour, though variable, is often more uniform throughout the lesion. The coulor may be black or red possibly with an ulcer.

These generally occur more commonly in people over 60yrs old. They start off slow growing before becoming rapidly invasive. The slow growing precursor can be referred to as a lentigo maligna or Hutchinson’s freckle. It may remain in situ for many years before it develops the capability to metastasise. The precursor lesion has the appearance of a freckle which is usually much larger and more defined than a ‘normal’ freckle. Whilst they can develop features similar to superficial spreading or nodular melanomas it is the development from the precursors which distinguishes them as a lentigo maligna melanoma.

These can occur at any age, any ethnicity and thought to be unrelated to sun exposure. They are the rarest form of melanoma and can be found on the soles, palms and subungually. They often present late because the patient may be unaware of them. Sometimes in diabetic patients they are misdiagnosed as an ulcer. Beware of bleeding callus where they are hidden by a reactive keratin layer. They initially begin as flat pigmented lesions resembling moles, which start to increase in size and which ultimately develop irregular areas of pigmentation and sometimes ulcerate.

Which grow under the nail are most common under the thumb nail or the nail of the great toe. They can be very easy to misdiagnose, presenting as a fungal infection or a pyogenic granuloma. They appear at the proximal nail fold and arise from the nail matrix. They often present as a pigmented band in the nail, slowly widening sometimes producing a subungual mass which lifts up the nail plate causing bleeding.

The British Association of Dermatologists and the Melanoma Study Group guidelines describe the management of melanoma. Melanoma can clinically and histologically mimic benign lesions and the reverse, benign can mimic melanoma. Correct diagnosis is achieved from accurate history, lesion examination, comparison to a previous photograph if available followed with complete excision promptly. Incisional or incomplete excisions are to be avoided, because sampling error can result in an inaccurate diagnoses. (9)

All suspected Melanomas reviewed in primary care are to be referred as an urgent suspected cancer to secondary care.