Treatment of the motor symptoms with medication, is not usually started until symptoms cause significant disruption to daily activities, medication does not prevent disease progression, but does improve quality of life. The main families of drugs are levodopa (usually combined with a dopa decarboxylase inhibitor or COMT inhibitor), dopamine agonists and MAO inhibitors. In the elderly all these drugs can cause confusion and particular care in starting on low doses and titrating up slowly should be exercised.  Abrupt withdrawal of anti parkinsonian drugs can lead to neuroleptic malignant syndrome. Approximately 5-10% of patients respond poorly to drug treatment.

Due to a wide variation in PD patients, initial first drug choice may vary from one individual to another. For some a first choice drug may be a levodopa preparation, whilst for another an agonist or anticholinergic/MAO-B  drug may initially be prescribed. Factors such as age, presenting symptoms and concurrent health issues will all need to be considered when it comes to evaluating which is the best medication for each individual. 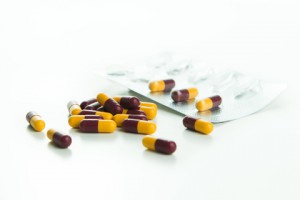 Dopamine Replacement is thought to be neuroprotective

(L- Dopa) has been used for over 40 years. It is the most effective drug in the treatment of PD. It is associated with reduced morbidity, it is prescribed to most patients with the condition at some point, either on its own or in combination with other treatments. (9)

Only 5–10% of L-Dopa crosses the blood brain barrier.

The remaining 90-95% of the L-Dopa  which doesn’t cross blood brain barrier is often metabolized to dopamine elsewhere, causing peripheral side effects such as nausea,  joint stiffness and dyskinesias (involuntary writhing movements). Other side effects include daytime sleepiness and impulse control disorders.

Carbidopa and benserazide are peripheral dopa decarboxylase inhibitors; they help to prevent the metabolism of L-DOPA before it reaches the dopaminergic neurons, therefore reducing side effects and increasing bioavailability, and a lower dose of levodopa is needed to treat symptoms. They are generally given as combination preparations with levodopa;

Initially L- dopa treatment may be delayed by using Dopamine agonists and MAO-B inhibitors in the hope of retarding the onset of dyskinesias;

Dopamine Agonists; Initial treatment with an agonist is effective in treatment of motor features. There are less long term dyskinesias and motor fluctuations than with L- Dopa.  However acute side effects are more common, although these do abate within a few days to weeks. They are recommended in younger patients and in early disease. Prolonged use of dopamine agonist monotherapy for greater than a year can lead to substantial side effects (psychiatric)  and  levodopa is eventually required.

Dopamine agonists can also be used as an adjunct to levodopa to reduce “off time”, and improve motor impairment in patients with response fluctuations to levodopa.

Ergot-derived agonist transdermal preparations need renal function, ESR and CXR before treatment, and repeated annually. Theyare rarely used because of the risk of fibrotic reactions. These drugs are bromocriptine, cabergoline, lisuride and pergolide

MAO-B Inhibitors (thought to be neuroprotective) prevents breakdown of levodopa in the brain.

Selegeline used alone can delay the need for levodopa therapy. An orally disintegrating formulation (Zelopar) increases bioavailability and can be administered at lower doses than conventional selegiline, with similar clinical effect, this may be especially useful for patients who report adverse events after initial treatment with conventional selegiline or who suffer from swallowing difficulties.

Antimuscarinic drugs reduce tremor and rigidity in idiopathic PD, but not bradykinesia.  They are used more abundantly with drug induced parkinsonism.   Drug preparations are procyclidine and orphenadrine.