Gender identity describes one’s internal sense of self and is being increasingly acknowledged as including a wider range of possibilities than ‘male’ and ‘female’. The biological component is likely rooted in a complex interplay between neurobiology (eg: sexually dimorphic regions of the developing brain), and the endocrine system (eg: gene expression, receptor function, etc).3 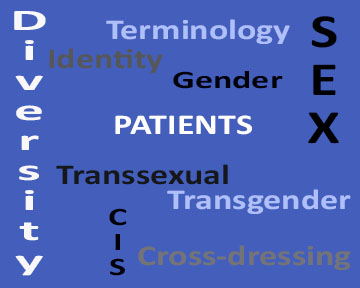 Gender identity is not the same as sex and is wholly separate to sexual orientation (sexual attraction, sexual behaviour, sexual identity, sexuality).

Gender non-conformity refers to gender expression (how masculinity and/or femininity are expressed, for example through certain behaviours, the use of clothing, hairstyle, etc) that challenges stereotypical gendered behaviour. Gender non-conforming individuals may simply choose to express their gender in an unconventional way and may not request the services of gender identity specialists. Indeed, not all gender non-conforming people identify as trans.

Cisgender (commonly shortened to ‘cis’) has its meaning derived from the Latin prefix cis- meaning “this side of” and refers to individuals whose sense of their gender corresponds to that assigned to them at birth.

Trans (an abbreviation of ‘transgender’) is a commonly used umbrella term to capture a broad range of gender identities that are other than ‘cis’. It is a widely used and accepted term in the UK.

Some people, having completed their transition, prefer to be regarded simply as a man or woman with a ‘trans history’ and not as trans.

Gender incongruence can be loosely defined as the experience of the mismatch between a person’s gender identity and assignation at birth. It is also the diagnostic term used in the ICD-11 (the WHO International Classification of Diseases 11th Revision), and it is listed in the ‘Disorders of Sexual Development’ chapter.

Transsexual, while possible as an identity, is mostly seen as a somewhat outdated diagnostic term. While also describing this mismatch, it goes on in its definition to include “a desire to live and be accepted as a member of the opposite sex”. It is also strongly associated with gender-affirming surgery, most commonly genital surgery (such as vaginoplasty, or phalloplasty).

As a diagnostic category, it has been replaced by gender incongruence in order to acknowledge and include those with non-binary identities who do not identify with, or indeed desire to transition to, a binary position.

Transvestitism is not a gender identity. It denotes a preference for cross-dressing as opposed to living permanently as a gender different to that assigned at birth. The term may be considered offensive due to out-dated and pathologizing associations. ‘Cross-dressing’ (or cross-dresser) is commonly preferable.

Intersex is an umbrella term referring to conditions where sex-differentiation is not uniformly achieved. Intersex people do of course have a gender identity, but it is best practice among trans and intersex groups to understand trans and intersex as distinct and distinguishable phenomena, one relating to sex, the other to gender.

Someone is misgendered when they are referred to using a pronoun, name, or title that does not correctly reflect the gender with which they identify. This can generate significant psychological distress.

Lastly, it is important to consider the cultural context when thinking about trans identities particularly with regard to how a person might experience living authentically and the risks that may be involved with doing so.