Insufficient physical activity and poor physical fitness are significant risk factors for premature mortality; achieving the recommended minimum level of physical activity is likely to reduce the risk of an early death by 30%.1 Physical inactivity and low physical fitness are independent of other risk factors and becomes even more significant when you consider the high proportion of the population who are inactive and lack fitness (Figure 1). 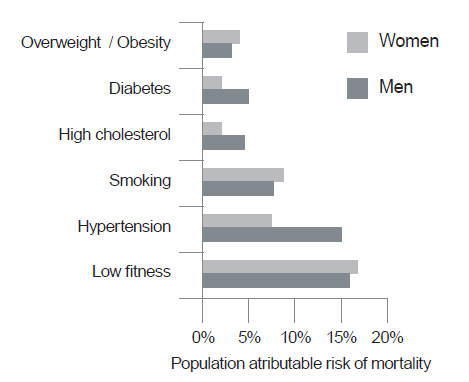 There is an inverse relationship between the amount of physical activity and premature all-cause mortality: the more active you are the less likely you are to die prematurely.3 Poor muscle strength is also associated with premature mortality, probably due to an increased risk of falling (Figure 2). 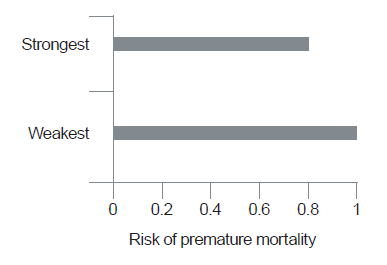 Spending long periods of the day sitting down (more than 6 hours) is also associated with an increase in the risk of premature mortality, even if you are active.5 Many patients find it difficult to understand the meaning of risk reduction and so research has also been used to show the effect of physical activity on longevity. Even low amounts of physical activity reduce the risk of dying prematurely. As little as 15 minutes of exercise per day can add approximately 3 years of life compared with inactive individuals.6 The same study suggested 30 minutes of regular physical activity (the UK Physical Activity Guideline level) could potentially extend life by 4.2 years in males and 3.7 years in females.

References: Can be found in Chapter 18