In most of these conditions lifestyle factors of physical activity plays an important role.

Studies suggest that activity may alleviate depressive symptoms in the general population and also that depressive symptoms may be a barrier to activity, i.e. the relationship is bidirectional. 12 As for the most effective form of activity, moderate intensity exercise is effective but low intensity exercise appears to have no effect. 13 Recent meta-analysis of the adult population, suggested that moderate intensity physical activity interventions, aerobic activity, and if supervised by exercise professionals, can have a greater effect on major depressive disorders. 14,15 In children and young adults (up to age 20) differing exercise intensities fail to show any significant effect.16 However, within this age the scientific evidence is still limited to form firm conclusions.16

Advice on physical activity should be given in conjunction with antidepressant medication and or psychotherapy treatments. 19

For people with persistent sub threshold depressive symptoms or mild to moderate depression, one choice is to offer referral for a structured group physical activity programme which should:

Many studies have evaluated the effect of physical activity on anxiety and some link physical activity to a consistent reduction of anxiety symptoms. 10,20,21 This is best seen in state anxiety with less evidence in trait states. 20,21 But the research on children and young adults remains limited 16 so physical activities may be more effective as an adjunctive treatment for anxiety disorders and appears less effective when directly compared with antidepressant drug treatment. 22

The physical health of people with severe mental illness such as schizophrenia, depression and bipolar disorder is often poor with a high risk of premature death and a shorter life expectancy of at least 10 years. 1, 2 This excess cardiovascular mortality in schizophrenia and bipolar disorder is attributed in part to the increased modifiable coronary risk factors of: 2,4

In most of these conditions lifestyle factors of physical activity plays an important role.

NICE guideline CG 178 on Psychosis and Schizophrenia in adults: treatment and management recommend: 28

Physical activity has been shown to improve the quality of sleep, 29,30 whilst many studies have shown improved wellbeing with physical activity training. 31 Improved psychological wellbeing is also the most common comment made on self-reported feedback questionnaires. 20

Dementia is a term used to describe a group of symptoms including memory loss, confusion, mood changes and difficulty with day to day tasks. It encompasses several forms with Alzheimer’s disease being the commonest and vascular dementia the second, followed by dementia with Lewy bodies.

The risk of dementia rises with age, with 1 in 14 people over 65 affected. 32 Globally the World Health Organisation has estimated there were 47 million people worldwide with dementia in 2015 and this figure is predicted to rise to 131.5 million by 2050. 33

Given steady increases in life expectancy, dementia is now a huge public health burden and there is therefore an urgent need to identify modifiable risk factors that prevent or delay its onset. In vascular dementia, the risk is thought to increase amongst those with a family history, hypertension, high cholesterol, smoking and diabetes, with all of these vascular factors being potentially open to modification by physical activity. 34 Across all forms of dementia, it has been recently felt that 35% of dementia may be caused by nine potentially modifiable risk factors, one of which being physical inactivity (see diagram). 35 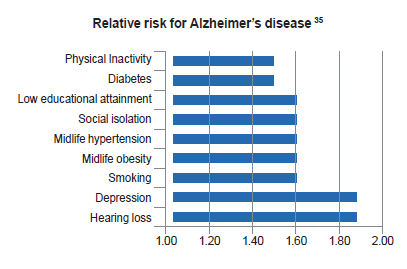 Ideally, random controlled trials (RCT’s) would determine whether implementing an increase in physical activity would lead to an improvement in cognitive decline. A recent meta-analysis 46 of RCT’s of exercise in over 50 year olds has shown physical activity interventions improved cognitive function significantly, regardless of cognitive status. Whilst another meta-analysis reported no overall evidence that exercise improves cognition in healthy older adults. 47 In addition, a recent long term study of 10,000 people followed over 28 years ,48 coupled with other recent studies 47, 49, 50, 51 has challenged the previous thinking by finding no overall protective effect of physical activity.

The 2017 Lancet Commission on Dementia prevention, intervention and care 35 suggests that “the potential mechanisms for physical exercise to improve cognition or prevent dementia are indirect effects on other modifiable risk factors, such as obesity, insulin resistance, hypertension, hypercholesterolaemia and general cardiovascular fitness, and via direct neurological effects such as increased neurogenesis, cerebral blood flow and BDNF concentrations.” 52 - 54

In conclusion, it is presently thought that physical activity is beneficial for brain function and may delay a decline in cognitive function. “In spite of this link there is not yet sufficient scientific evidence that physical activity can reduce the risk of brain disease that causes dementia (e.g. Alzheimer’s disease).” 55

Treatment of established dementia with physical activity: The results from random controlled exercise interventions to improve cognitive and functional outcomes for this population are also mixed, but there is evidence that exercise has no adverse effects and can lead to: 56-61

At present, the recommendation stands that people with dementia engage in physical activity for their cardiovascular and cerebrovascular health, for the reduction in the incidence of diabetes and obesity and for protection against frailty. Exercise as a fall prevention measure amongst the healthy elderly is well established, but recent meta-analyses also suggest that physical activity has a positive effect on the prevention of falls in those with cognitive impairment 62, 63 and Parkinson’s disease. 63

NICE guideline NG97 on Dementia 64 focuses the guidance on managing the risk of falling for people with dementia (in community and inpatient settings) by using NICE guidance on falls in older people (see next section of this resource). When using this guidance;

Exercise is an important part of any treatment plan for a patient with mental health problems. It can increase their quality of life and lead to fewer hospital admissions.

The Royal College of Psychiatrists has information for Exercise and Young People here. Or the Alzheimer’s Society for dementia advice and support.

References: Can be found in Chapter 18