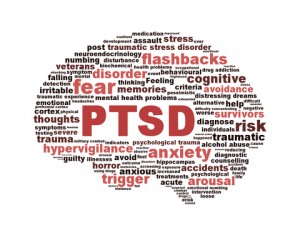 PTSD is a specific variant of anxiety. It may require tailored and specific psychotherapy and/or pharmacological treatment. It develops following a stressful event or situation of an exceptionally threatening or catastrophic nature, which is likely to cause pervasive distress in almost anyone. PTSD does not therefore develop following those upsetting situations that are described as 'traumatic' in everyday language, for example, divorce, loss of job, or failing an exam. (NICE)

PTSD is seen in active personnel at fairly low rates (figures vary from 1-8% from recent post conflict data). However Veterans are possibly twice as likely as the remaining civilian population to develop delayed onset PTSD. The first year after discharge is the most common time frame in which this will present. Soldiers, and in particular young, single ex-infantrymen, have the highest rates of PTSD (in common with other mental and physical health problems) related to their relatively higher rates of close combat experience.

This may be summarised by:-

Combat Stress is the UK's leading military charity specialising in the care of Veterans' mental health. On its website there are a number of stories – Paul’s story sums up PTSD from the point of view of the individual.

The are further PTSD Testimonials from Veterans who have accessed the Veterans' NHS Wales. 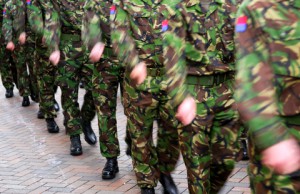 Effective treatment for PTSD involves a comprehensive assessment of the individual’s physical psychological and social needs. A risk assessment should be undertaken. Presentations in the community should have the initial assessment and co-ordination of care performed by their GP. The GP should assess the duration, severity and suicide risk. PTSD will often co-exist with depression and although there may be some therapeutic crossover, the management of depression will often not alleviate the PTSD symptoms and indeed PTSD may be resistant to treatment if the co-morbid depression is not addressed. NICE  recommends that healthcare professionals consider treating PTSD first in patients with PTSD and depression, as successful treatment of PTSD will often alleviate the depression. However, NICE furthermore recommends that where severe depression (for example, as evidenced by extreme lack of energy and concentration, inactivity, or high suicide risk) is present, that the risk is managed and depression treated first.

Nice recommends “All PTSD sufferers should be offered a course of trauma-focused psychological treatment (trauma-focused cognitive behavioural therapy or eye movement desensitisation and reprocessing). These treatments should normally be provided on an individual outpatient basis.”

In the case of Veterans in the community, it is likely that the traumatic event(s) triggering the PTSD will have occurred many months or years previously. NICE recommends that the duration of the trauma focused psychological treatment should last 12 sessions or more in this situation due to often multiple traumas. For most Veterans with PTSD, treatment options that should be discussed would include referral (or self-referral) to the Veterans' NHS Wales.

NICE recommends that “drug treatments for PTSD should not be used as a routine first-line treatment for adults (in general use or by specialist mental health professionals) in preference to a trauma-focused psychological therapy.”

The evidence base for pharmacological therapy in PTSD is weak:-

mirtazapine, amitriptyline and phenelzine – all have evidence of clinically significant benefits

Paroxitine - statistically but not clinically significant benefits on the main outcome variables. However it is the only drug with a licence for PTSD

NICE further recommends that hypnotics may be used short term where sleep disturbance is a major problem.

The advice for GPs therefore, would be to offer referral to any Veteran suffering with symptoms suggestive of PTSD. Consider the Veterans' NHS Wales– the experience of users of the service can be accessed here.