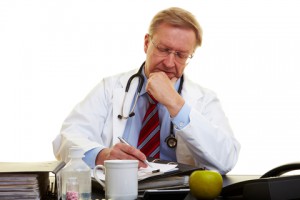 It is suggested that you look in detail at 10 consecutive referral letters you have written. The person to whom you have referred will be meeting the patient for the first time (usually) and a full patient history is important. Check the referral letters for the following details and if appropriate suggest changes. You may wish to include your reflections on the issues identified and learning points on the appraisal online form 3 template, and include your analysis as additional supporting documentation.

Please note this example is only a five stage audit, however it should be fairly simple to convert to an eight stage audit by repeating the data collection at an interval.

Analysis of referral letters should include:

I had always thought that I wrote extensive referral letters with all relevant details. I examined 10 referrals six months after I had written them and I was quite surprised at some of the detail I had omitted. Two of the referral letters did not contain the history of the complaint despite it being documented on the computer. In the four letters without medication history recorded only one patient was taking medication. I had not mentioned examination findings twice – in both cases negative examination findings and test results were documented. Only one patient did not have relevant psychosocial history documented (recent death of spouse) and in two cases I omitted relevant past medical history.

I was surprised to note that only 3 of the 10 letters met all the criteria and I must admit that there was one letter that if I had received it would not have told me enough detail to help me in the consultation. This analysis has helped me look critically at this important aspect of my practice and I have made the following changes:-

I intend to repeat this exercise in a year’s time to ensure the changes I have made are long lasting.