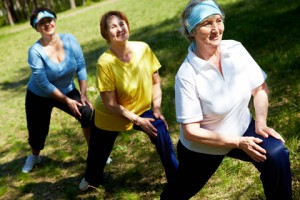 Exercise therapy is regarded as one of the cornerstones of lower limb OA varying from mild to severe (NICE 2006, NICE 2008, Zhang et al 2005, Zhang et al 2008, Hochberg et al 2012). The main goals of exercise are to reduce pain, improve physical function and optimise participation in social, domestic, occupational and domestic pursuits. Regular exercise for patients with OA of the hip and knee achieves increased muscle strength, increased proprioception, increased range of motion and cardiovascular fitness as well as an improvement in overall well being. Other important spin offs include a decreased risk from falls, metabolic abnormalities and a decrease in body weight.

There are a large amount of clinical trials that examine various types of exercise therapy, however, the significant impact of muscle weakness on pain and function favours most forms of therapy which provide muscle strengthening.

Land based exercise has consistently formed the cornerstone for treatment in people with OA knee. A recent Cochrane review (Fransen et al 2009) identified 32 clinical trials investigating land-based therapeutic exercise for knee OA. A wide range of therapeutic exercise programs were assessed, including those delivered individually to the patient, class-based programmes and exercises undertaken by the patient at home. Treatment content varied from relatively straight forward quadriceps muscle strengthening and aerobic walking programs to overall body conditioning regimens. The results of the meta-analysis showed small treatment benefits with a standard mean difference (SMD) of 0.40 (95% confidence interval 0.30 to 0.50) for pain and a SMD of 0.37 for increased function (95% Confidence interval 0.25 to 0.49).This would equate to a reduction in knee pain by 1 point on a scale of 0 to 20 and an improvement in knee function by 3 points on a scale of 0 to 68. These results are comparable to reported estimates for simple analgesics and NSAIDs taken for knee pain but without any of the side effects.

In contrast to knee OA, there is much less research into the role of exercise in hip OA. In a 2009 Cochrane review (Fransen et al 2009), only 5 RCT’s were found looking at land based exercise. A small effect size was found for pain but there was no evidence of a change in self reported physical function. There are many potential limitations to this meta- analysis and further studies are required. An earlier meta-analysis by Hernandez-Molina at al 2008 included a further 3 RCT’s evaluating hydrotherapy as well as land based exercise resulting in a significant treatment benefit for pain. The recommendation by the ACR (2012) is that patients with hip OA should participate in cardiovascular and/or resistance land based or aquatic exercise but this appears to be largely extrapolated from data from knee OA studies.

Importantly, there remains several unanswered but important questions regarding exercise for hip and knee OA.

The benefits arising from sustained weight loss are widely advocated by all current guidelines as a means of achieving metabolic and cardiovascular health benefits (NICE 2006, NICE 2008, Zhang et al (2005), Zhang et al (2008), Hochberg et al (2012)). The excess or abnormal loading of the joint appears to be implicated in the development and progression of OA of the joint and it is the prevention of obesity that will have the greatest impact on OA of the hip and knee (NICE 2008). At present there is no clear evidence that weight loss, either alone or in combination with exercise, can slow the progression of osteoarthritis of either the knee or the hip once established (NICE 2008). It is also uncertain as to the threshold at which weight loss should be advocated or magnitude of weight loss required to achieve a reduction in pain and disability and an increase in function. Most studies have also been aimed at knee joints making it difficult to generalise the findings to the hip.

In a study by Aaboe et al (2011) the effect of a weight loss intervention for knee joint loading was examined; the association being that obesity is thought to cause OA through increased joint loading. One hundred and fifty seven participants with radiographic changes due to osteoarthritis completed an intensive 16 week dietary weight loss programme. The diet was accompanied by nutrition education and behaviour therapy to encourage adherence, with the goal of reducing initial body weight by at least 10%. With a mean weight loss of 13.2%, decreased knee joint loading potentially slowed progression of the disease. A similar study was undertaken by Messier et al (2005) who concluded that each weight loss unit was associated with a 4X reduction in knee loading forces. This was twice that found by Aaboe et al (2011) so needs to be interpreted cautiously. Unfortunately both studies had no long term follow up of disease progression so the results have limited clinical utility.

Christensen et al (2007) conducted a systematic review looking at the effect of weight reduction in obese patients diagnosed with knee osteoarthritis. Four RCT’s (n=454) were considered suitable for inclusion. The active interventions included a low energy diet (3.4MJ/day), Mazindol a low energy soup, nutrition and cognitive behavioural therapy in various combinations and durations from 8 weeks to 18 months. Pooling of data from the trials reported self-reported disability effect size (ES) of 0.23 (95% CI 0.04 to 0.42 p=0.02) favouring weight loss, pain ES of 0.2 (95% CI0 to 0.39; p=0.05) favouring weight loss. The heterogeneity of the included studies raise concern about the strength and generalisability of the evidence and small effect sizes of the results.

Bliddal et al (2011) conducted a prospective RCT. The 1 year trial consisted of two groups of patients with diagnosed OA knee. The active group received two periods 0-8 weeks and 32-36 weeks when they received 810kcal/day in the form of a nutrition powder. They also received instruction aimed at achieving 1200kcal/day for the remainder of the year. This totalled 44 sessions with the dietician. The control group was given 2 hours of nutritional advice at baseline and in weeks 8, 32, 36 and 52 advising them on maintaining 1200kcal/day. This resulted in a mean weight loss of 10.9kg (11%) in the active and 3.6kg in the control group. There was a significant clinical improvement in the total Western Ontario and McMaster Universities Arthritis Index (WOMAC) at 1 year in which the intervention group showed a decrease approximately twice that of the controls. The reduction in pain was also significant although the lack of difference in function and disability was not significant. The authors failed to comment on the steady increase in weight of the controls between weeks 8 and 32 and 36 to 52 when the mean weight of the control group rose 2.8kg in 20 weeks despite fortnightly meetings with the dietician. In the second period of 4 weeks when the patients were taking nutrition powder the mean weight loss was only 0.7kg compared with 11.6kg in the first 8 weeks. This again reinforces the difficulty in maintaining weight loss especially with lack of difference in function and disability (may have been due to underpowered sample size) and small though clinically significant reduction in pain even though an intensive intervention was trialled.

In a meta-analysis by Tsai et al (2006) 6 randomised trials published between 1989 and 1997 met the inclusion criteria. The majority of studies enrolled patients with a BMI of 35-40kg/m2 and used hypocaloric diets to achieve weight loss. The average weight loss was 16.1 kg with dropout of rate 22.5%. Follow up assessment which ranged from 1 to 5 years (mean 1.9), the average weight loss was reduced to 6.3kg. These findings suggest that efforts to maintain weight losses are unlikely to be successful in the majority of patients. It is suggested that behavioural fatigue in adhering to a rigorous diet and exercise regimens in the presence of a toxic environment as well as up regulation of peripheral and central hormones that regulate appetite and energy expenditure may account for this weight gain.

In conclusion, the long term benefits of weight loss in reducing pain and improving function and disability remains unclear, but the following points are important to the success of a weight loss programme: